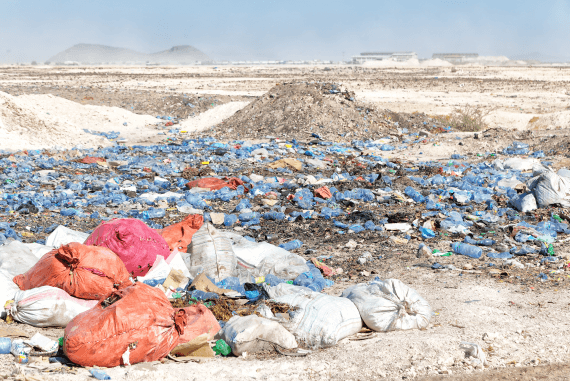 Along with the air and waterways, the contamination of land is one of the most common and prevalent forms of environmental damage and placing in jeopardy the health, safety and wellbeing of both people and animals.

Contamination can cover a variety of different negative environmental impacts including deforestation, but is most commonly attributed to sewage and chemicals which seep into the soil and can be poisonous if consumed by humans or animals, and can prevent plants and crops from growing in it, often for a number of years into the future. This contamination of the land usually affects nearby watercourses also as these toxins get washed into nearby streams and rivers when it rains, with this pollution causing death or harm to fish and other creatures living in the water or relying on it for drinking.

In countries where it is difficult to grow crops due to lack of available water or poor nutrient soil, the contamination of any fertile land is particularly damaging to humans as it is a reduction of the available area upon which to grow crops for food. If too much land is contaminated and not enough food can be grown, it will lead to starvation and the associated disease and death that inevitably comes with it.

The severity of contaminated land upon all life forms whether people, plants, animals or insects means that many countries have introduced strict environmental legislation to prevent the contamination of land, not to mention an increase in environmental awareness and qualifications like the NEBOSH Environmental Certificate for employees of an organisation to enable their company to reduce its environmental impact and potential damage to their reputation.

Contamination of the Soil

Soil which has been contaminated in some way can pose a serious risk to the health and wellbeing of all living creatures in the area, and as such is a serious environmental health issue. This is because contaminated soil can enter the body and impact creatures in a number of ways.

One of the most common ways in which contaminated soil can have a significant detrimental effect upon the environment and affect the health of living creatures is through the contaminant seeping through the soil and affecting groundwater. This water will be used by plants and animals for drinking or being taken up through their roots, meaning that any contaminants in the water will enter into the cells of the living organism. In most cases this will cause serious ill-health or death to occur even over the short term, but is particularly likely with exposure over a long period of time.

The contamination of groundwater will not just affect plants and creatures in the immediate vicinity of the contamination, as this water will likely find its way into rivers, streams, lakes etc, meaning toxic and hazardous contaminants can affect large areas and travel great distances from the source. It is for this reason that water pollution is one of the most common and worrying forms of environmental pollution that exists, and is one of the key focuses for any environmental health and safety training course or programme which is conducted.

Prevention of Leaks and Spillages

A cause of a high percentage of environmental damage is through leaks and spillages of substances hazardous to health. The substances involved will vary but typical ones include oil and sewage. It is imperative that companies have procedures in place which minimise and reduce the chances of a leak or spill occurring to as low a level as is reasonably practical not only to prevent damage to the environment, but also to avoid any regulatory fines or even criminal prosecution in severe cases of negligence or breaking of legislation. As well as having procedures in place, a company also needs to ensure that their employees are suitably trained in how to comply with them in order to obtain maximum effectiveness. Health and safety training is an area which cannot be skipped over or done on the cheap as the consequences of an accident or incident taking place can be extremely severe for both those involved and for the company's management and directors. Employees need to have a good knowledge of general health and safety risks and issues as well as a thorough understanding of how procedures and control measures operate and their role and responsibilities in relation to them. As far as environmental safety is concerned, having employees who hold the NEBOSH Environmental Certificate will translate into a workforce who are much more aware of how their actions can negatively affect the environment.

Along with training programmes and control procedures, it is also important that companies perform regular inspections and maintenance on machinery and equipment. Even when all procedures are followed to the letter, a fault in equipment such as pipework or storage containers can result in the escape of hazardous liquids into the ground and surrounding watercourses.

Preventing leaks and spillages, certainly the prevention of any substances that have escaped from getting out and damaging the environment, often does not require significant investment or disruption to operations to establish. Additional health and safety training (including refresher courses), along with regular inspections, good maintenance practices and simple safeguards such as bunded areas and storage containers with thicker walls can make the difference between an environmental disaster occurring or not.

Use of the Land

The intended use of the land is an important consideration when assessing an area where the soil has been contaminated, as is the amount of contamination which has occurred. Varying Soil Guideline Values (SGVs) exist depending upon the intended uses of the land, as this will determine factors such as the age of the intended occupants (i.e. are they children?), the length of time a person may spend on the site, and its intended use (specifically, will it be involved in food production such as a farm or allotment?).

Why Treating Contaminated Land Will Be Different Each Time

Different methods of treating and taking remedial action to clean up contaminated land exist such as isolating and containing the material/substance on site, removing the contaminants away to landfill, introducing other substances which break down the contaminant and either eliminate it altogether or reduce it down to acceptable limits etc. The method(s) employed will need to be the most appropriate and effective according to the contaminants in question, the particular concentration and the intended use/occupants of the site once the remedial work has been carried out.

Because two sites are unlikely to be exactly the same, each one is likely to require a tailored, bespoke approach to the removal and/or treatment of contaminants and pollutants on site in the soil or groundwater which can cause health issues to any living creature on the site. This is why those carrying out the environmental assessments and overseeing the clean-up process need to be appropriately trained and qualified to do so, otherwise not only could they be overlooking and leaving behind a hazard which could endanger a person, but they may even end up making the situation worse. Just as with other areas of health and safety, a little knowledge is often more dangerous than no knowledge at all, as a person who thinks they know what they are doing will attempt it and do an inadequate job, whereas a person who knows that they lack the required knowledge and expertise will bring in a suitably qualified professional for the task.

The safe treatment of contaminated land may also require those carrying out the process to wear suitable protective equipment to keep them from harm, along with frequent monitoring to ensure their exposure to levels of contaminants do not exceed recommended guidelines in terms of the amount and/or length of time.