›› ›› ›› Substance Misuse, Alcohol and Smoking in the Workplace


Substance Misuse, Alcohol and Smoking in the Workplace 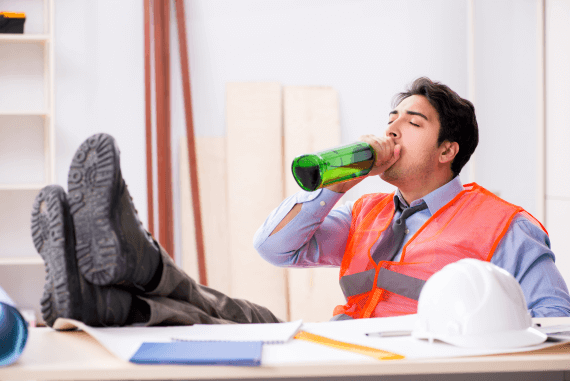 Health and safety in the workplace is not just confined to those accidents and incidents which happen in the place of work. Managers must also ensure that those who come into work are in a fit state to perform the tasks demanded of them, as a failure to do so can result in serious accidents which adversely affect not only themselves but also has the potential to kill or injure others nearby. This is a particular issue when the worker has a task such as operating machinery, driving moving vehicles or monitoring the condition of hazardous substances.

Substance misuse, either from alcohol or other legal or illegal substances such as drugs, can seriously impair motor skills and a person's judgement. It can also lead to an increase in staff absenteeism if people feel too unwell to come into work, which can have serious financial consequences for the company as they have to arrange cover for the absent worker or suffer a reduction in output. Whilst it is a financial headache for the company, it may be preferable in some ways if the person stays away rather than comes to work and tries to do their job where they may make a mistake and have/cause an accident.

Managers also need to ensure that this abuse does not happen in the place of work itself. Many companies will have a strict no drinking of alcohol policy anywhere on the premises, whilst the partaking of many types of drugs will be illegal whether it is at work or not. If a worker is engaged in this practice, they may be perfectly fine when a manager or supervisor sees them as they arrive for work, but will then not be in a competent state to work later on. Effective monitoring and supervision of employees needs to take place, even if it is just a quick chat every now and again throughout the day, as well as making it clear that this type of behaviour is totally unacceptable and will result in instant dismissal from the company.

Along with health and safety issues associated with hazardous substances that are covered by coshh regulations, the misuse of substances such as alcohol and drugs is covered on NEBOSH General Certificate courses, more details of which can be obtained by clicking here.

Alcohol and indeed any form of intoxication or substance use can be a problem for managers of an organisation as it will seriously impair the ability of a worker to perform their workplace duties in a correct, efficient and above all, safe manner. Whilst these risks can come from a person taking drugs, either legal or prescription, the most common hazard comes from alcohol. Even a small amount can affect the judgement and motor skills of a person which can have serious health and safety repercussions for themselves or those around them. Managers and/or supervisors need to ensure that people turning up for work have not been drinking and are in a fit state to work competently.

However, the beginning of the day or shift is just one point in time. It may be the case that workers are sober at the start but drink as their working day progresses. This may either be on the premises when managers are not looking or, more likely, during a lunch break. Some workers may leave the premises to go down to the pub during their lunch break and drink alcohol. Whilst they are unlikely to have the time to get extremely drunk, even a small amount can be enough to cause a mistake or misjudgement when back at work which can have severe ramifications.

To combat an actual problem or to discourage potential infringements managers not only need to carefully monitor workers to check for signs that they are intoxicated, but also need to create and enforce rules which make it clear that drinking before or during working hours will not be tolerated. This can be done through health and safety training and talks which include the pitfalls and dangers associated with drinking alcohol and performing tasks such as operating machinery. Courses and qualifications like the NEBOSH General Certificate also cover the effects of substances when looking at workplace hazards and risk controls. It may be that a worker has a serious alcohol problem rather than just someone who goes to the pub at lunchtime and has a drink, in which case help may be sought.

How Can Smoking be a Health and Safety Risk in a Workplace?

Since the introduction of new legislation in many countries such as the UK over the past decade or so which prevents smoking in public buildings including places of work, the issue of health and safety with regards to smoking in the workplace has become largely irrelevant. However, there are still countries where this legislation has not yet been introduced, along with those who deliberately flout the rules.

In countries where smoking is still allowed in a place of work, the main risks to health will come from passive smoking where others are forced to breath in other's smoke, and the potential for dropped or discarded cigarettes to start a fire if it comes into contact with flammable material or liquids such as oil or petrol.

There may still be potential for danger even in countries where legislation prohibits smoking in a place of work. Despite legislation and the risk of punishment there will still be people who break the law and smoke at work.

Some workplaces will be outside, such as a construction site, and whilst they may not be covered by legislation in terms of it being outdoors, there should still be rules imposed by the owners and operators to prevent smoking where it poses a risk of causing a significant accident or incident if it caused a fire and/or an explosion. As far as construction sites are concerned, the likely presence of fuel for machinery and many different forms of flammable material will mean that any construction site manager should strictly enforce a no smoking on site policy, or create a specific smoking area which is well away from any sources of fuel for a fire in order to reduce the likelihood of a fire being started from a used or discarded cigarette or cigar.