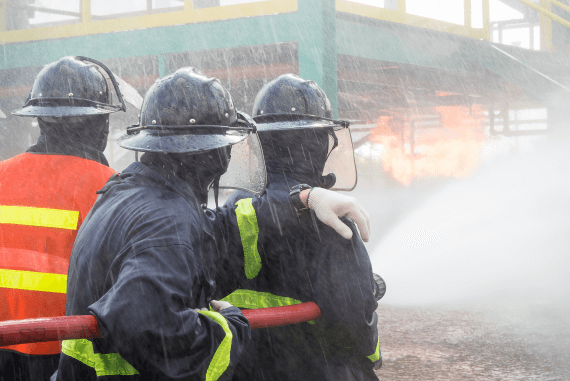 Fires at a place of work can be extremely damaging on a number of levels, not only to property but also to the health, safety and wellbeing of human and animal life nearby.

Fires can endanger the surrounding environment, principally because fires create multiple hazards, both directly from the fires themselves, but also indirectly from efforts to tackle and extinguish the flames.

Quite often, the level of damage and destruction done to the local environment and wildlife as a result of tackling it can ultimately be worse than the damage left by the fire itself.

Heat and flames are probably the first things that come into a person's mind when they think of the danger and hazards associated with a fire. Whilst it is true that the flames do cause significant damage by burning materials or any organic matter that gets trapped in its way, the majority of deaths from fires actually occur as a result of the smoke produced. Not only can this smoke overcome those who are trapped in a building and are overcome by the smoke, suffering death from asphyxiation, but this smoke can also be extremely toxic if hazardous substances are burnt by the flames, which causes death or severe ill health to anyone who breathes it in.

As far as the environment is concerned, this too can be damaged by flames burning the surrounding plant life and animal habitats, as well as the damage caused by the smoke which can coat plants and vegetation and prevent a sufficient amount of photosynthesis from taking place which is needed for them to stay alive. Toxic substances which are spread by the smoke can also settle on the trees and plants and be absorbed through the leaves or roots and be detrimental to their survival and prosperity.

An often overlooked and forgotten about risk to the health and wellbeing of the local environment is that caused by the efforts to put out the fire.

The most common way of extinguishing the fire is to spray huge quantities of water onto the flames. Whilst this may be an effective way to put out the fire, all of this water will seep into the ground and any nearby watercourses if containment measures are not put into place beforehand, carrying with it any harmful particles and substances that were on the site.

The potential pollution and effects on the health of those living in and depending upon the water will greatly depend upon what matter and materials which have been burnt and affected by the fire, but the potential consequences on health can be devastating if it is particularly toxic and/or enters the water in a high concentration. In fact, even material which is not toxic can cause death to life forms if it finds its way into the water in a high enough concentration, as it may block sunlight or limit the ability of fish to process water through their gills and obtain enough oxygen to breath.

Just as asbestos was used for its fire retardant properties, a lot of firefighting foam was, until relatively recently, manufactured from fluorinated organic compounds. Although asbestos and this foam are good in terms of supressing fire, both are extremely harmful to organic life.

The toxic chemical PFOA and other fluorinated organic compounds used in firefighting foam would runoff into nearby watercourses and are thought to increase the risk of conditions such as cancer, endocrine disruption, and harm to foetal development (Source: www.eurekalert.org).

At present, there is a lot of debate surrounding such foam. Whilst it is very effective, and has no doubt saved a lot of lives around the world in both civilian and military use, as understanding of its harmful environmental effects increase, there are growing calls for its use to be banned and replaced with an alternative.

Rushing to Tackle the Blaze

The potential problems caused by fire fighting efforts are so numerous and serious, that lengthy documents such as the 264-page Environmental Protection Handbook for the Fire and Rescue Service are necessary to cover all of the possible situations and environmental training required.

As if the pressure and danger of actually tackling a blaze were not enough, fire fighters also have to keep in mind all of dangers that could befall nearby plant and animal life. Although it is a lot to think about, it needs to be paid attention to, as the potential damage could have serious implications not only to plants and animals, but also to the health of people too.

An article on the International Fire Fighter Magazine website tells how runoff from a waste wood fire in Derbyshire killed aquatic life over several kilometres, and how the Buncefield fire of 2005 was still causing environmental issues over twelve years later. This just goes to show how much damage and devastation can be wreaked simply by efforts to tackle a fire.

The natural instinct will be to rush in and help. If one or more people are in serious danger from, say, a burning building, thoughts about protecting the environment will probably not be the first ones that come to mind. However, as we have seen above, a failure to take necessary steps to protect the environment from the firefighting efforts can cause serious environmental damage, possibly for many years to come.

The Difficulty of Knowing Exactly What is Burning

Another challenge facing those responding to emergency calls related to fire is that they may not have all of the information regarding what type of materials or substances are stored in the building.

If the fire is in a small section of an extremely large complex, they may also not know how much of a risk the contents of that part pose. For instance, a large building may primarily have non-toxic items in the vast majority of it, but it could be the tiny storage room which is ablaze that houses all of the hazardous chemicals.

With only a limited amount of information to go on, there will be a need for those arriving on the scene to err on the side of caution and take all necessary steps to prevent environmental damage from occurring. When faced with a highly pressurised situation, and possibly with very little time with which to act, this can be a difficult task to achieve.