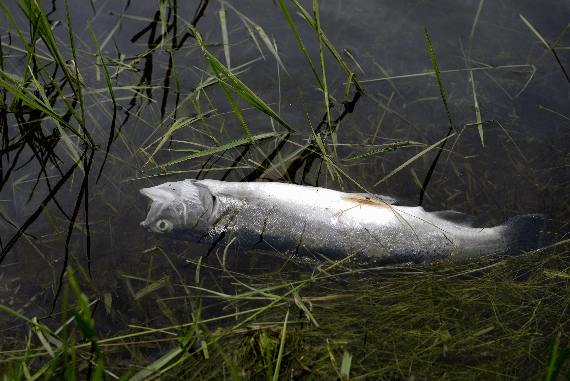 Unsurprisingly, a significant amount of training, risk assessments, safety controls and emergency procedure planning goes into preventing harm coming to people. These people at risk can be the workers on the premises, or those living and working nearby who may be affected by any disaster or incident that may unfold.

Whilst this is obviously highly important, managers and workers must also remember that they have a duty to protect the environment as well as the health and safety of humans, and that just because all necessary steps have been taking to make hazardous substances safe for people does not necessarily mean that there is no longer a danger to plants, animals and other organisms in the surrounding environment.

Although still quite fragile in terms of the range of extremes which it can tolerate (e.g. temperature, acidity etc), the human body is actually much more tolerant than the vast majority of other life forms in this regard. This means that even though gases or other substances being released into the environment may have been treated and made safe in terms of not causing harm to people, it might still be damaging or even fatal to non-human life.

A particular area of concern is that of the danger to aquatic organisms living in nearby streams, rivers, lakes, oceans and any other body of water which may be affected. These creatures can be highly sensitive to any change in water variables, and it will therefore not take much to make the water toxic to aquatic life, even if the water was within acceptable levels as far as the health and safety of people is concerned.

It is for this reason that water pollution is one of the most common topics associated with environmental health and safety training. Polluting watercourses can cause death and devastation to aquatic life over a large area if, as is likely, the harmful toxins flow and spread through streams and rivers.

Because of the fact that even a slight change in water conditions can cause a lot of harm, companies need to be exceptionally careful about the waste water and other liquids they discharge into the surrounding area. Even pure, clean water can be harmful if it is at an extreme hot or cold temperature for instance.

Plants, too, depend upon water to survive and grow, and contaminated groundwater which is safe for humans can still be damaging or fatal for plant life. This can subsequently have a negative effect upon people if they rely on those crops for food, and a poor harvest or even total destruction of the crop can cause starvation if it occurs in a country or area which struggles to import an alternative source of food.

As is highlighted in the section above on aquatic organisms, the liquid does not necessarily have to be toxic in terms of its chemical makeup to be harmful. Not only are trees and plants susceptible to extremes of temperatures just like other living organisms, but they also depend upon particular nutrients and chemicals in the soil. Liquid released by a company, even if it is perfectly harmless by itself, can still upset the delicate balance of nutrients required by certain types of plants and trees growing in the region, leading to a poor harvest and/or the death of the plant.

The harmful effects of gases on the environment tend to be more on a global, cumulative scale. This is because gases released into the open air quickly disperse from a high concentration to levels which are not dangerous. It will be rare for a business to release a gas which on its own poses a threat to plant life nearby but would not also be dangerous to people too.

Gases can still build up and be a danger to people and animals in certain buildings such as animal housing facilities where there is a manure pit underneath. Toxic gases can build up such as carbon dioxide and methane, which can pose a threat to people and livestock in the form of asphyxiation and explosions (Source: http://nasdonline.org/48/d001616/manure-gas-dangers.html)

Instead of causing damage on a local scale, gases and emissions from firms rise and accumulate in the atmosphere, contributing to issues such as rising global temperatures and disruption to weather patterns. Although there will be indirect costs to people in the form of failed harvests and damage to property from extreme weather events, the damage to plant and animal life will be far more severe.

Whilst technically there are some plants and trees that can move, all others grow where they have sprouted, and are therefore stuck with the soil and air conditions they experience. Global warming and the changing levels of the gases which make up the air have an effect upon trees and plants. From interfering with plant respiration, too much or not enough water, and a change in the levels of ultraviolet light reaching the plant from the sun through the atmosphere, there are many possible hazards to plant life that are caused by the release of gases.

One example of solids which is currently making a lot of headlines in the media is the issue of microplastics in many of the world’s oceans. The World Health Organization (WHO) currently states that tiny pieces of plastic less than 5mm in length are not currently known to cause health risks at current levels, as most plastic passes through the body without being absorbed (Source: https://www.bbc.co.uk/news/health-49430038). It does warn that much more research is needed however.

Assuming the above is true from a human viewpoint, research suggests the ingestion of plastics does cause health issues for fish. An article on nature.com from 2013 claims that ingested plastic transfers hazardous chemicals to fish and induces hepatic stress.

The above is another example of how substances which may have little or no negative impact on people can be dangerous to the environment, and who action and suitable measures need to be put into place.

Managers Need to Consider the Health of All

It is therefore important for managers - especially those new to a managerial role who are probably already struggling to remember everything that their new role entails - to not only consider potential negative consequences regarding the health and safety of workers and other people nearby who may be affected by the activities and by-products/waste produced by the company, but also the effect that they may have on the environment. This is true even after making substances safe for humans.

Rather than guessing or trying to figure it out for themselves, environmental training courses will provide the information they need to gain a firm understanding of potential impacts, and safeguards necessary to prevent damage and disaster. Attending a NEBOSH Environmental Certificate course or similar will give managers and workers a much greater understanding of how their activities can affect the environment, and how they can lessen their negative impact upon it for the benefit of all life forms.