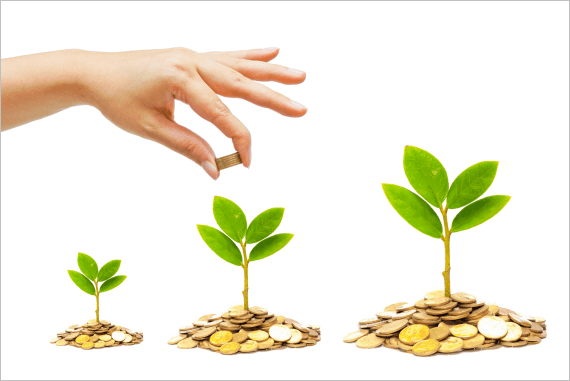 We have already seen in the article "Environmental Risk Assessments Should Consider All Situations" that a company which invests in environmental training, along with the implementation of environmental controls and procedures, will find that they will almost certainly recoup the initial cost many times over in the long term with the avoidance of issues such as expensive fines, unnecessary wastage and inefficient use of materials and other resources. They will also be much less likely to cause a significant environmental accident the causes widespread devastation and tarnishes their reputation and brand image amongst potential customers, leading to a sharp fall in sales. So in this case, financial investment in environmental controls and performance will most of the time provide a good return on investment.

For larger corporations, in particular those which are listed on a public stock exchange, their environmental performance can have a significant effect upon the level of investment they receive and the value of the company's share price. This is because many investment funds which have substantial amounts of money to invest are specifically tailored to buying shares in ethical companies. By being a major polluter, it will likely result in their shares not being eligible for purchase by these funds.

As managers and directors often hold a large number of shares in the companies they run and receive additional shares as part of bonus packages, it is in their interest to have a share price which is as high as possible.

Not only does environmental performance affect future share price appreciation, but an environmental disaster will cause a severe decline in the share price as current investors are spooked by the likely financial provisions for clean up costs, compensation payouts and reduced demand for its products.

A competitive advantage, whether large or small, can be the difference between a business succeeding and failing. With so much competition for the custom of consumers, anything which makes a company stand out from its competitors can be the factor that makes a person choose that company over another with which to spend their money on its products or services.

One such competitive advantage can be the company's environmental performance and reputation for being an environmentally-friendly corporation. It can achieve this in a number of ways such as using recycled raw materials to manufacture its products, using renewable energy instead of relying solely upon electricity from the grid, planting more trees than it cuts down for materials, and committing money and other resources to a comprehensive environmental management system.

Along with health and safety dangers being reduced from the prevention of environmental accidents which can adversely affect the health and wellbeing of people, animals and plants, the financial benefits that come from taking environmental considerations seriously can be many, as detailed above, and are not solely limited to the increased sales revenue that comes from consumers who are impressed with the company's environmental record, operating procedures and activities.

With more and more consumers and investors paying closer attention than ever to the environmental performance of organisations, there has been a tremendous upsurge in demand for qualifications like the NEBOSH Environmental Certificate and bespoke environmental health and safety training in order to teach employees about their environmental responsibilities and how to prevent accidents from occurring which have negative consequences for the surrounding environment and local community.

An increasing number of businesses in today's corporate world not only pay great attention to their own environmental impacts and responsibilities and improve the knowledge of their employees by having them attend NEBOSH Environmental Certificate courses for example, but are also increasingly concerned with the environmental conduct of their suppliers.

This is because purchasing supplies or materials from a company can be seen as an endorsement of that particular organisation. If it comes to light that they are heavy polluters or have other negative issues which tarnish their image such as a poor health and safety record, inadequate working conditions or low rates of pay for employees, consumers will question why the larger company is doing business with them. Large companies are often associated with these smaller suppliers when negative publicity surrounds them, and being seen to endorse or encourage such behaviour will have a detrimental knock-on effect to their own reputation and brand image.

Not only are current suppliers subjected to scrutiny of their environmental performance, but potential suppliers too are likely to have their environmental credentials assessed by the procurement policies of the large organisation's purchasing department. So even if the smaller company does not feel like their current level of operations warrant much time and attention to be devoted to addressing their environmental impact, they may be missing out (often unknowingly) on large new orders which they may have gotten had they addressed and reduced their adverse effect upon the surrounding environment.

Why Too Much Stock Could Ultimately Be Bad For The Environment

All businesses like to make a profit. Even charities or not-for-profit organisations will still have costs than need to be paid for somehow, so generating more money than is paid out will be gratefully welcomed by any organisation. Along with increasing the amount of money that comes in, the other way of producing or increasing profit levels is to reduce the amount paid out in costs.

Aside from wages and premises costs, a major expense facing many businesses - especially those which manufacture products - comes from the cost of buying supplies and raw materials. Companies obviously want to pay out as little money as possible without sacrificing on the quality, which means that if they can get the same product for a lower cost then they will jump at the chance. One way of doing this is to buy in bulk, as many suppliers will offer goods at a slightly lower cost per unit for larger quantity orders.

Whilst this extra stock may save money and increase profits for the company, there can be undesirable consequences with regards to both the health and safety of people, and the effect upon the local environment.

The fundamental hazard associated with too much stock lies with the fact that it has to be stored somewhere. This is fine if the company has adequate facilities to store the quantity ordered, but problems can arise if they do not have the available space, and have to store a bigger quantity than they are geared up to handle.

Not only can storage areas become full to the brim with stock piled high on top of each other and causing a danger of items falling onto people below, but there will also be a temptation to store the overflow in other places, such as corridors. This can create multiple hazards, including:

Having a lot of stock on the premises can lead to a serious environmental disaster if an emergency situation should arise, particularly if the emergency is a fire. Poisonous gases and toxic chemicals can be released into the air as the items burn, and large volumes of water used to extinguish the blaze can wash hazardous chemicals away from the site and into the soil, where it can seep into groundwater and pose a danger to people, as well as causing serious environmental issues as it kills or damages plant and animal life.

For more on this, see our article entitled "Fire Fighting and Environmental Damage".

Limit Quantities of Stock and Supplies

It may be extremely tempting from a financial point of view to focus solely on price and order large quantities of materials, and then worry about where to put it all afterwards. However, it is important to consider, before purchasing, that you may be creating a health and safety danger which can put the safety and wellbeing of people at risk, not to mention that of the environment should a situation such as a fire happen to take place.

Targets and Measuring in Environmental Processes

Nearly every business in the world will have set targets and goals in areas of performance. Aspects such as health and safety and financial objectives are amongst the most common for management to concentrate upon, however environmental issues are also becoming increasingly prevalent for targets and performance measures to be introduced and monitored against.

These environmental targets can cover a variety of different elements including the reduction of waste, consuming fewer/lower levels of resources, increasing the amount of material which is reused or recycled... the list is extensive and varied. Conducting an environmental impact assessment along with having employees who hold the NEBOSH Environmental Certificate or similar qualification will greatly assist in this task of environmental hazard identification and suggested remedial action.

Once areas for improvement have been identified, targets will need to be set. Targets for improvement in any area - environmental or not - need to be carefully considered rather than an arbitrary number simply plucked out of the air. This is because defined targets need to be achievable, even if they are tough to accomplish. If a target is set which a person, team, department or company has no hope of ever achieving or coming close to, it will result in many not even bothering to attempt the improvements because they feel as if the end objective is unobtainable.

Targets also need to be applied to areas of improvement where the factors involved can actually be measured. Those that cannot and/or have targets as simple as "Reduce Waste" are too ambiguous and largely meaningless as there is no measurable contribution or definitive target. In this situation it is far more preferable to have a target such as "Reduce the number of units rejected by quality control by 10% this year compared to the previous year". This will not only give the department a specific figure upon which to focus on, but can also easily be measured to see if it has been achieved or not at the end of the period.

Spending time and money on putting in place safeguards and procedures for protecting the environment is often viewed by company managers as an inconvenience. Because this money is not being spent on items which they can see has a direct impact on revenue, such as buying extra raw materials to increase production, they view it almost as a waste and an unwanted burden.

A similar attitude is typical amongst many managers for health and safety training too. They thing of spending money on this training as an unwanted cost, without realising that not spending this money can actually end up costing the business more in the long run.

Just as is the case with health and safety training for staff within the business investing in safety measures, the same is true with regards to safeguarding the environment. A business which fails to mitigate its impact upon the environment, and/or neglects to scrutinise the actions or inactions of its suppliers, can soon find that it costs them far more, either directly or indirectly, in the not too distant future.

So even if a company manager does not care a great deal about protecting the environment and is only interested in profit, it is still in their interest to spend money and take necessary steps regarding environmental safety.