How Can Your Business Create a Coaching Culture?

Culture. It is a word we all use quite a bit, isn’t it?

Think about it. We talk about corporate culture, data culture, company culture, employee culture – the use of the words seems to grow almost by the day.

All of these things can be crucial. But, arguably, the most important – and one that underpins many of the other workplace uses of the word – is coaching culture.

Let’s be honest, it’s a term we’ve all heard.

But what exactly does it mean? Why should you create one, and how difficult is it to implement?

To answer these questions and many more, I sat down for a chat with Tienie Loubser, the BCF Group’s learning and development director and a man who has helped several companies create coaching cultures.

And we began by looking at exactly what ‘coaching culture’ means.

“A coaching culture is one where everyone is used to asking and answering questions,” he explained.

“It is a culture where people do not feel threatened by being asked questions or where egos get in the way and where it is seen as a way of getting to the right option.

“And it is about helping people who are already performing well to get even better and achieve their potential. Coaching is no longer viewed as a remedial activity.

“It is like an Olympic athlete or top sports star – they all have coaches to help them improve and reach their full potential.”

Sounds good, doesn’t it? And we are going to explore how you can create it. But, before we go any further, let’s take a look at the benefits of a coaching culture.

These are numerous, but key ones include:


That is an enticing list of benefits for any organisation.

But how do you create a coaching culture?

It all starts with training.

“But it is not just about giving these people business coaching training. You need to give your trained coaches time to do coaching.

“One of the main reasons why companies try and fail to set up coaching cultures is because they train up people to be coaches and then give them limited time to do the coaching.”

The key to avoiding this trap is to allocate 20 per cent of each coach’s time to coaching and to make it a performance indicator.

It is also vital coaching time is protected and isn’t binned when employees feel under pressure or struggle to meet a deadline.

Tienie said: “People often tell me that they felt they didn’t have time for the training, but when they get into it, they love it.

“If you are up against a project deadline, coaching will help you feel motivated again. And the coach might ask you questions that you can take back into your work.

“So, instead of looking at it as something you have to free up time for, think of it as an oasis where you can solve problems in peace and quiet.”

If coaching is so vital, why not have people in the organisation whose role is just to coach?

Tienie thinks that would be risky.

He said: “I think that person would become an informal chat person – someone people would just see to bitch and moan.

“You don’t want a coach to be the dumping ground for all the moaning. Effective coaching is a mixture of informal and formal, structured sessions.”

So, we know that to create a coaching culture, 10 per cent of the workforce need to be trained. But how do we identify those who should do that training and who will be good coaches?

Tienie says the overriding factor should be that those put forward want to do the training.

“You need to pick those who want to do it. Not everyone is going to be great at it. But the willingness is stronger than the theory.

“Ultimately, you should aim to create a situation where your most experienced coaches ask themselves why people should want to be coached by them and should be able to write down at least 20 reasons. And an aspiring coach should aspire to reach a similar figure.”

Another vital consideration here is that coaches do not need specialist knowledge. You can coach someone who works in a different part of the business.

Tienie said: “I don’t have to be a chartered accountant to coach a hedge fund specialist. I need to be a great coach.

“The four skills we offer in coaching are asking the right question, listening, moving things forward and giving supportive feedback.

An aspect I was keen to explore was how much of a role the senior leadership team needs to play.

Clearly, they set the direction of the business, and will decide to create a coaching culture.

But does that mean they need to participate in the coaching?

Tienie believes their involvement can be more subtle than that.

“Many of them will already have had coaching, and I don’t think there is benefit in them being trained by junior executives,” he said.

“What I do think they need to do is to show that they are committed to coaching. For example, it might be good for them to be coached by an external coach so they understand the process and what is involved.

“But the key thing for them to do is to support the initiative by creating opportunities for people to be coached.”

If you like the sound of what you are reading, you might be wondering how long it takes to instil a coaching culture. One business Tienie has worked with to create a coaching culture did it in eight months. But the answer varies.

What is clear is it is something that needs considerable ongoing commitment.

“It takes between eight and 18 months,” he said. “Maybe even two years.

“There needs to be a consistent focus on coaching. At the start, people might be enthusiastic. But you can quickly find yourself in a situation where that 20 per cent time allocation for coaching becomes 10 per cent and then five per cent.

“And slowly you get to a position where time cannot be allocated to it anymore, and the whole thing dwindles and fizzles out.

“Even when you have created a coaching culture, there needs to be a consistent focus on coaching.

This left me with just one more question. How do you know when you have successfully created a coaching culture?

“You’ll know you have a coaching culture as soon as a junior person coming into the business feels comfortable questioning the CEO.

“Because all they are doing is being inquisitive and curious. And if the CEO is worth their salt, they’ll ask questions back and get that junior person’s thoughts.

“It becomes an interactive conversation.”


Keen to find out more? Get in touch to see how our Institute of Leadership and Management business coaching courses and bespoke training options.

Please see below for some courses and qualifications which you may be interested in: 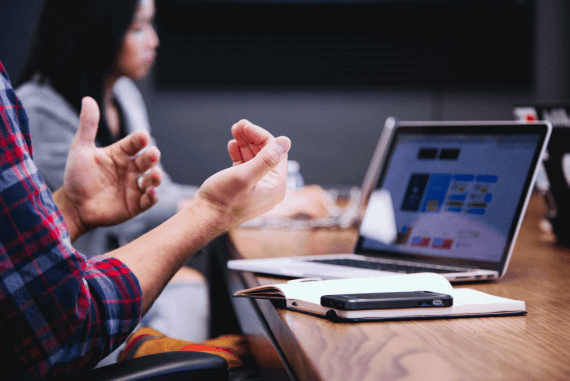 This two-day course will provide you with the skills and behaviours to communicate clearly, confidently and effectively.

Our expert tutors will guide you through a packed syllabus that includes explaining the communication process, the different styles of influencing, the importance of body language and tone of voice and non-verbal communication.