Regular Maintenance and the Environment

Performing regular maintenance on machinery and equipment is not only essential in terms of the health and safety of workers and members of the public, but can also greatly assist with the preservation of the environment and the reduction of direct or indirect pollution levels.

Why is Regular Maintenance Important? 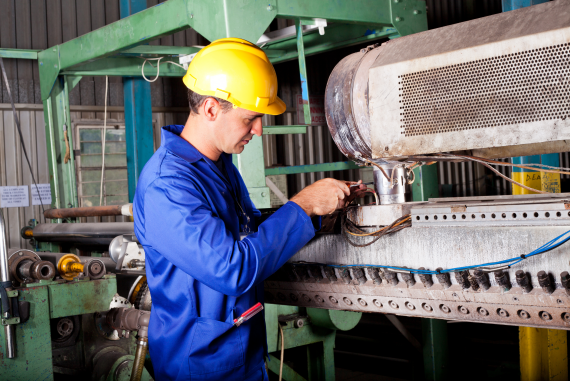 Thorough maintenance can help to identify potential hazards and imminent dangers from failing machinery, as well as keeping the machinery performing as efficiently as possible for longer than it would if it was just run until it eventually broke down.

For example, small tyres on a moving part may need to be inflated on a regular basis in order to maintain correct inflation levels. If the tyres are underinflated, more power will be required to move the machine, with this power often being provided by the burning of fossil fuels somewhere along the energy creation process line.

Along with preventing accidents and injuries, maintenance can also have a financial benefit for the owner and operator, as a machine which is running more efficiently will have lower running costs associated with its use, not to mention well-maintained machines breaking down less than ones which are not serviced often and wearing parts replaced. Unexpected breakdowns can cause financial nightmares for managers, as the loss of output can disrupt revenue and cash flow if goods cannot be manufactured and sold. In such circumstances, the manager would probably have to scramble around and somehow find the money needed to repair the machine safely but as quickly as possible in order to get production restarted.

Machinery Maintenance and the Environment

Certain types of machines can seriously damage the environment if they are not correctly maintained, such as giving out toxic fumes which exceed specified limits. Whilst they may work fine, the harm to the environment is not acceptable and is probably a violation of legislative regulations, not to mention being a likely danger to the health and safety of everyone nearby as they breathe in the harmful fumes.

A good example of this is a company which operates a fleet of vehicles to transport goods or people around. We have already seen in the article "Reducing Vehicle Numbers Benefits Health and the Environment" how fewer cars, lorries and vans on the roads will benefit the environment in terms of things such as air quality, but it is also the case that a well-maintained fleet of vehicles can be far less damaging for the environment than a similar number of poorly maintained ones.

Vehicles which are not suitably maintained can encounter issues such as catalytic converter failure. When this is not performing efficiently (or at all), a greater amount of toxic exhaust emissions will be released, poisoning the air for all living creatures around, including people. Toxic exhaust fumes given off by vehicles, and the consequent air pollution this creates, can lead to the creation and/or exacerbation of many different health conditions including heart attacks and strokes.

Although the vehicles probably drive and go perfectly well, the manager of the company needs to take action to address the issue. Many developed countries now have strict (although some would argue not strict enough) legislation regarding the level of harmful particulates and toxic fumes coming out of vehicle exhaust pipes. In the UK, a vehicle will fail its MOT test if it does not pass the emissions check, which would then make it illegal to drive it on a public road in such a condition.

Fines are obviously the most direct form of punishment a person or business can receive if they fail to maintain their machinery and equipment up to a standard which does not cause harm to the environment. Everyone has an obligation – both moral and legal – to protect the public from environmental hazards, which means putting the public at risk can be punished with a fine, or even imprisonment in really serious cases. The same is true for damaging plant and animal life in the surrounding area too.

Although monetary fines are designed to punish wrongdoers, whenever they are handed out it means that the damage to the environment has already been done. It is far better to prevent this damage from occurring in the first place, and whilst the threat of fines will stop some, there are also financial benefits to be gained by proactively taking steps to prevent harm to the environment.

These were mentioned earlier in this article, such as lowering running costs and breaking down less often. Many managers, particularly those who are new to the role and for whom this may be their first experience of being a manager, may only take a short-term view and try to make as much money as possible before the machine eventually breaks. In nearly all cases, this will ultimately end up costing the business more in the long run.

Whilst having some down time to properly maintain the machine will cost money in lost production, the amount will nearly always be far less than would need to be spent in having to repair it when a part breaks and causes damage to other components. Also, a couple of hours shut down to perform maintenance can be less damaging than having the machine stopped for a week whilst a replacement part is ordered and then installed.

Regular maintenance is essential not only for the smooth running and prolonging the useful life of equipment, but also for preventing harm to the local environment. Even if an individual or company does not care too much about protecting the environment, punishments in the form of monetary fines as well as the benefits that can be obtained through properly maintained equipment and machinery, make it in their interest to schedule suitable maintenance which will benefit everyone.