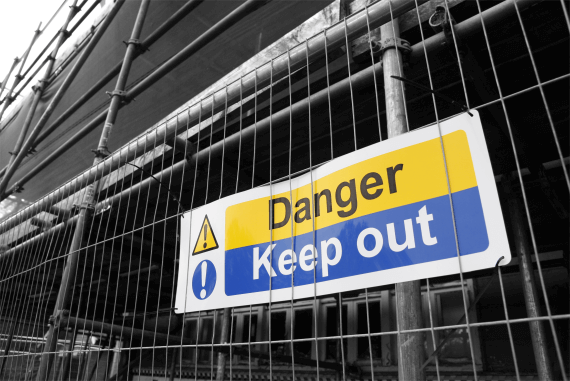 Our collection of Construction Site Health and Safety Articles provides a large number of examples of the countless dangers which exist on a construction site. These hazards can not only affect those who are working on the site, but also other groups who may access the construction site. This is either with permission, such as site visitors, or unauthorised access, such as children who sneak onto the site when nobody is around.

This is why not only are construction site health and safety training courses such as a NEBOSH Construction Certificate course necessary for those working on the site in order to prevent accidents and injuries, but suitable security and prevention measures need to be put into place to prevent access to the site for those who should not be there.

As well as deliberate trespassers, this also includes those who may inadvertently wander onto the site without realising it, such as those people walking a dog and accidentally enter a sprawling construction site which does not have an appropriate security perimeter fence erected around it.

One such issue which is associated with a construction site is that of noise. Although it will mostly only pose a danger to those on the site who are located close the source of the noise (usually machinery), if it is exceptionally loud it may also have the capability to damage the hearing of nearby members of the public, although this will be quite rare as suitable fencing should mean they are prevented from getting close enough to the demolition or construction activities to be at risk from noise.

Much more common is the potential for this site noise to cause irritation and annoyance to those living or working nearby. Whilst it might not cause damage to hearing, it can still cause other health issues such as stress, as the disruption and distress caused by the noise increases stress and anger levels.

Other Health and Safety Issues Related To Noise

Activities which create noise will nearly always have other risks to health and safety associated with them apart from the potential to damage hearing.

For example, noisy machinery such as pneumatic drills will not only create a noise issue, but the actions which produce the sound such as striking the hard ground will create other health and safety issues. This can include the possibility to injure feet through operating the machine, as well as hazardous substances/coshh dangers through dust produced which can be inhaled or cause eye irritation to people situated over quite a large radius.

Noise and Vibration Effects on Health and Safety

When most people consider health and safety risks from noise, they immediately think of damage to hearing from loud sounds. What many forget is that loud noise can also create vibrations than can impact the health, safety and well-being of people. Although it will not cause as many issues as loud noises which damage hearing, it is still important and necessary to consider it whenever activities or places of work which have the potential to produce such sound levels are concerned.

Vibrations from sound, or indeed any other source, can result in cracks and other structural damage to buildings occurring. If this goes unchecked it can ultimately result in the partial or total collapse of a structure, which puts in jeopardy the health and safety of all those inside who may be killed or injured by falling debris. Vibrations can also cause cracks and damage to pipes such as those carrying water or gas, which can lead to flooding or fire/explosion risks.

Although rare, sound vibrations can cause objects to fall off tables and shelves. This can be potentially dangerous if the objects were jars or containers of hazardous substances which fall to the floor and break open, releasing their contents into the air. Spaces such as laboratories and chemical storage areas are two such places where this could be an issue.

Low frequency noise and vibrations can also disrupt sleep patterns if occurring at night (or indeed when anybody is trying to sleep!), or can just disrupt concentration and increase stress levels if it takes place where somebody is trying to work.

This risk is distinct from vibrations from machinery which can cause conditions like Hand-Arm Vibration Syndrome (HAVS). Although this machinery does emit sound, sometimes to such an extent that it can damage hearing also, the vibration is caused by the machine itself or its contact with the ground or other hard surface, not by the sound it produces.

Vibrations in the ground will also disrupt wildlife in the vicinity, which is why noise and vibration effects upon the environment need to be considered. Sounds and vibrations can scare creatures such as nesting birds and other animals, and can be a legal issue in some countries if the particular animals being disturbed belong to a protected species.

Businesses and individuals therefore have a legal and moral responsibility to prevent their actions and operations having a negative impact upon the local environment, and is a factor which needs to be considered in any environmental risk assessment which takes place.

It is the responsibility of construction site managers to ensure that workers on the site have suitable protection, such as ear defenders, and have undertaken suitable health and safety training to keep themselves and their hearing safe from harm.

It is also their responsibility however to ensure that sound levels are kept to decibel levels as stipulated by governmental legislation. Construction sites, or other industries such as mining, can produce noise levels which have a significant effect upon the surrounding area. This legislation is designed to protect people and wildlife from excessive disturbance from sound.

Even in situations where all noise legislation is being adhered to, it is still highly worthwhile for site managers to take steps to keep noise levels to a minimum. Not only will this reduce the likelihood of a worker falling victim to noise-related hearing damage, but it will also lessen the chances of those living and working nearby complaining about the activities on the site.