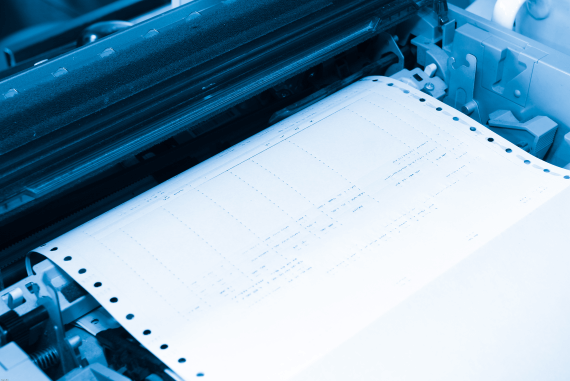 Whilst all printers will make a noise to some extent, the crown for the noisiest type of printer must go to the dot matrix printer. Also known as an impact printer because of the way it works by pins striking an ink-soaked ribbon, the image of this printer feeding through connected sheets of paper with perforated pre-holed sides will be remembered by many, especially those working in companies a decade or two ago as these printers were particularly used for printing invoices and delivery notes for example.

Printers seem everywhere nowadays, but back then it was only really governments, businesses and educational facilities who could afford to purchase a printer before the price came down far enough to make them affordable for individual consumers to own.

The other feature which many will remember, probably not too fondly, is that of the noise which the dot matrix printer made. It takes its name from how it operates; by striking pins into an inked ribbon, similar to how a typewriter operates. These dots are close together and collectively make up the shape of each individual letter, number or character. The striking of the pins caused the noise, which was surprisingly loud.

Although not as loud and as dangerous as other occupational noise issues which can be found in a place of work, the noise created by the dot matrix printers still posed a slight risk to the hearing of those nearby, particularly those unfortunate people who had to work at a desk right next to where it was situated. The long-term effects of being exposed to such noise every working day could cause damage to hearing in certain cases. To combat such noise, covers could be placed over the printer, or more preferably, locating the printer in a separate room away from where people are working, although this was not always possible.

Advances in printer technology which produce much clearer text and images with very little sound has meant that the dot matrix printer has disappeared from many businesses and institutions.

However it does continue to be used for certain applications such as invoice printing which simply require text to be printed that does not have to be razor sharp in clarity and does not require any images to be printed as the paper is manufactured already with the logos on it. Also, this type of printing is used in applications such as bank card pin codes sent in the mail, where the top and bottom half are glued together, and invoices which vary greatly in length as the continuously fed paper can be cut to the correct size at any point (rather than having to squash everything onto a sheet of A4 paper!)

Printer manufacturers such as Epson continue to introduce new models of dot matrix impact printers, so the technology is very much still alive. This latest models are quieter and have better sound insulation than their predecessors of a few decades ago.

Some of the advantages of dot matrix printers are listed below:

Although better than it used to be, noise is still an issue with dot matrix printers. However, they do not have some of the other health and safety concerns which other types of printers have, for example the possibility of respiratory problems or other health risks associated with printer toner.

Rather than being a relic of the past, dot matrix printers are still very much used in a number and variety of companies and industries across the world. They are ideal for those who do not need high quality printouts, and so prioritise low cost over print clarity. Although colour is available on some models, dot matrix printers are typically used by those who are solely interested in printing black or grey text.

The new models brought to market to satisfy this consumer need, whilst still working on the same overall principles of the earlier versions, have introduced new features and improvements in technology. One such improvement is in the reduction of sound levels to much more tolerable decibel levels. Rather than a significant danger to health, safety and wellbeing like it was before because of its noise level and risk to an employee's hearing, dot matrix printer noise is still a consideration, but more of an irritation these days rather than a genuine risk.

Of course, there may still be a risk of the noise coming from a printer potentially causing damage to a person's hearing if all or any of the following apply:

This noise is a risk to a person's health and safety in just the same way as any other hazard such as a COSHH threat or a manual handling danger. As such, it will need dealing with in the same way: performing a comprehensive risk assessment, eliminating the hazard if possible (e.g. can the printer be moved to another room that has nobody in it?), issuing PPE if applicable (i.e. earplugs or ear defenders), and ensuring that all maintenance and knowledge levels through training are kept up to date.

Related External Articles on Other Websites: